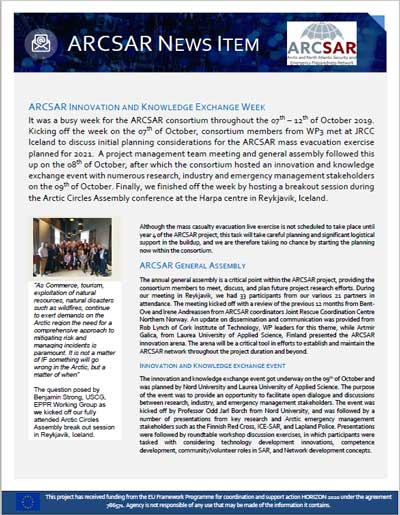 It was a busy week for the ARCSAR consortium throughout the 07th – 12th of October 2019. Kicking off the week on the 07th of October, consortium members from WP3 met at JRCC Iceland to discuss initial planning considerations for the ARCSAR mass evacuation exercise planned for 2021. A project management team meeting and general assembly followed this up on the 08th of October, after which the consortium hosted an innovation and knowledge exchange event with numerous research, industry and emergency management stakeholders on the 09th of October. Finally, we finished off the week by hosting a breakout session during the Arctic Circles Assembly conference at the Harpa centre in Reykjavik, Iceland.

“As Commerce, tourism, exploitation of natural resources, natural disasters such as wildfires, continue to exert demands on the Arctic region the need for a comprehensive approach to mitigating risk and managing incidents is paramount. It is not a matter of IF something will go wrong in the Arctic, but a matter of when”

The question posed by Benjamin Strong, USCG, EPPR Working Group as we kicked off our fully attended Arctic Circles Assembly break out session in Reykjavik, Iceland.

Although the mass casualty evacuation live exercise is not scheduled to take place until year 4 of the ARCSAR project, this task will take careful planning and significant logistical support in the buildup, and we are therefore taking no chance by starting the planning now within the consortium.

ARCSAR GENERAL ASSEMBLY
The annual general assembly is a critical point within the ARCSAR project, providing the consortium members to meet, discuss, and plan future project research efforts. During our meeting in Reykjavik, we had 33 participants from our various 21 partners in attendance. The meeting kicked off with a review of the previous 12 months from Bent-Ove and Irene Andreassen from ARCSAR coordinators Joint Rescue Coordination Centre Northern Norway. An update on dissemination and communication was provided from Rob Lynch of Cork Institute of Technology, WP leaders for this theme, while Artmir Galica, from Laurea University of Applied Science, Finland presented the ARCSAR innovation arena. The arena will be a critical tool in efforts to establish and maintain the ARCSAR network throughout the project duration and beyond.

INNOVATION AND KNOWLEDGE EXCHANGE EVENT
The innovation and knowledge exchange event got underway on the 09th of October and was planned by Nord University and Laurea University of Applied Science. The purpose of the event was to provide an opportunity to facilitate open dialogue and discussions between research, industry, and emergency management stakeholders. The event was kicked off by Professor Odd Jarl Borch from Nord University, and was followed by a number of presentations from key research and Arctic emergency management stakeholders such as the Finnish Red Cross, ICE-SAR, and Lapland Police. Presentations were followed by roundtable workshop discussion exercises, in which participants were tasked with considering technology development innovations, competence development, community/volunteer roles in SAR, and Network development concepts.

“Are we prepared for a large passenger aircraft, ditching on the ice in the high north, with several hundred passengers on board” “Are we prepared to leverage the knowledge and skills of Arctic indigenous people in emergency planning and response efforts?” Benjamin Strong, USCG, EPPR Working group

ARCTIC CIRCLES ASSEMBLY BREAKOUT SESSION
We were delighted to collaborate with the SEDNA consortium in hosting a breakout session at this year’s Arctic Circles Assembly in Reykjavik, Iceland. The Title of our session was: “Emerging Threats within the Arctic – How ready are we to cope?” The session was chaired by Rob Lynch of Cork Institute of Technology, and consisted of the following presentations and discussions:

The session attracted a full house of participation and provided us with an excellent opportunity to showcase some of our research efforts, while also collaborating with another EU H2020 funded programme to further broaden the dialogue and discussion on safety and security within the Arctic and North-Atlantic.

INNOVATION ARENA LAUNCH
The launch of the ARCSAR Innovation arena marks a significant milestone within the ARCSAR project. The arena itself which is designed to foster collaboration between research, industry and emergency management stakeholders, while also providing a space for discussion and knowledge generation, can now be shared with the network and beyond for immediate for use. Please feel free to engage with our arena and request access from the following link.

📣 UArctic Shared Voices Magazine 2022 is now published with an article by Natalia Andreassen about joint collaboration exercises on Arctic safety and security, higlighting the lessons from the latest ARCSAR TTX. 🤝#uarctic

The latest issue of our annual magazine, Shared Voices, is now available online. The 2022 issue continues with stories of impact from individual, institutional, and community perspectives.
View on Facebook
· Share

ARCSAR was invited to present the project at the #MAREC final conference at World Maritime University - headquarters. Our project manager gave an overview of innovation mapping for new procedures, technology and methods. Rob Brown from our partner Memorial University of Newfoundland gave examples on how to use #SAREXes as a learning tool, asking the question - what will we learn from our ARCSAR LIVEX in Svalbard? Stay tuned for that this autumn! ... See MoreSee Less

For those who read Norwegian (or are handy with Google translate), High North News published an article written by Natalia Andreassen and Rune Elvegaard from NORDLAB about our latest oil spill respose table-top exercise "ARCSAR TTX - Oil in ice" arranged in hybrid format. They highlight the importance of detailed planning, innovative pedagogical solutions for practitioners, focus on learning and, of course, cooperation across various institutions. 🤝💭 ... See MoreSee Less